The Stanton County Golf Course is an enjoyable nine hole grass green course that is operated seven days a week with members and visitors welcome. The course has a ten-station driving range and a large putting green. The course superintendent and the pro shop manager are available at the club house for club repair, custom-built clubs and cart rentals. Just a real nice place to golf!rn

Over the years, on the treeless prairie of Southwest Kansas, Steve and David Parman have carved out an unlikely livelihood from wood.

Watch how their handcrafted and personally designed kaleidoscopes are made in the Parman Brother’s factory on Johnson’s Main Street.

“Just last year we sold 6,214 kaleidoscopes, which were shipped to dealers across the country, as well as internationally,” office manager, Carol Ruth said.

Made from a variety of woods, including red gum, black walnut, maple and oak, the scopes range in price from the desk scope at $24.95 to the cathedral, with a wood base that revolves, listed at $229. rn

The Stanton County Museum gives a glimpse of the past and fascinating look at the history of Stanton County. There are nine buildings on the museum site and each has a special story to tell about the residents and the proud pioneer history of this county.

1. The main building of the museum complex is built of native stone. Originally constructed as a shop for the road department, the building was built in 1935 as a WPA project.

2. The Santa Fe Depot was constructed in 1923. It was sold at auction 60 years later and purchased

by Alfred Ramsay and donated to the museum. The depot houses railroad memorabilia including a small collection of 1930\’s Santa Fe calendars.

3. The decommissioned Santa Fe caboose has been repainted inside and is set up similar to what it would have been like for the train crew who used it as working and living quarters.

4. The Vosburg ironclad elevator was constructed in 1928. As the largest elevator in Johnson, it had a capacity of 15,000 bushels of grain. Most grain trucks of that era held only 60 bushels. The elevator was moved from its location on the railroad tracks to the museum site in 1994.

5. The scale house that accompanies the elevator features weighing equipment and other artifacts necessary for operation. A second room in the scale house is a bunkhouse room with cowboys and farmhand artifacts.

6. The reconstructed jail houses the county\’s original double jail cell with attached corridor, and tells the story of the progress of law enforcement in Stanton County.

7. The Ray Scott building was moved from its location just off Main Street. It has the original pressed tin ceiling and wall. It houses the museum\’s collection of transportation and tractors, along with automotive tools and accessories.

9. The old general store building has been home to a variety of businesses and still contains original counters of Tucker\’s general store.

A tradition since 1950, the International running of the Pancake Race has become a symbolic event of peace and unity between the Untied States and England.

Pancake Day is always on Shrove Tuesday, the day before Ash Wednesday, the start of Lent. Some people refer to it as “Fat Tuesday.” It is a centuries-old traditional holiday.

In Old England it was customary for the housewives to drop whatever they were doing and hurry to the church at the tolling of the bell to be “Shriven” for their sins.

In 1445, a housewife in Olney, England started baking her pancakes rather late. They were not quite finished when the church bell rang.

Not wishing to leave her pancakes to burn, she hurried to the “shriving” carrying her griddle and the pancakes with her. This led to the annual sporting event in England.

In Liberal, Kansas, USA, we heard of this 500 year event of pancake racing over a 415 yard course from the “town pump” to the church when a World War II American soldier from Liberal met a soldier from Olney.

The event was brought to Liberal, and in 1950 the international challenge was accepted by Reverend Ronald Collins, Vicar of Olney.

In the running of the International Pancake Day Race, times of the winners in both Olney and Liberal are compared by Trans-Atlantic telephone and an international winner is declared.

Over the years a three-day celebration has grown up around the event in Liberal. A concert, amateur talent show, pancake eating contest, parade, community pancake breakfast, Kids races, Men’s Pacer race, International Pancake Race, receptions and other special events provide for a full schedule during the celebration. It has been suggested that perhaps the Pancake Race with women of Olney has established a grassroots international understanding between people of the two countries. This might never have been possible to accomplish over the conference table at top-level diplomatic sessions…

As someone in England said, “Long may the race flourish as a relic of simple enjoyment from our colorful and robust past in this sophisticated and somewhat grim atomic age.”

It is customary for Liberal and Olney to send dignitaries to each country, so that an official representative is present at the race. At the end of the race, the dignitary congratulates the race winner with the Kiss of Peace.

Enjoy an evening at the ballpark with the future pros as the Liberal Bee Jays take to the diamond. The Liberal Bee Jays baseball team is an all-star cast of collegiate athletics practicing their skill in the competitive Jayhawk Conference. Many past Bee Jays, like Doug Drebek, David Segui, Troy Percival, Tom Pagnozzi, just to name a few, have gone on to All-Star careers in the Major Leagues.

Travelers on U.S. Highway 54, struck by the round horizon and massive skyscapes, would be surprised to find a series of ponds, streams, marshland and groves of cottonwood trees just north of the straight path they drive.rnYet such a place exists, nestled in an area of canyons and hills north of the highway.

Its Arkalon Park, home to a variety of wildlife, the favorite haunt of local fishermen, and a welcome shady spot for campers and picnickers. Located 10 miles northeast of Liberal, Arkalon is a project that will always be in progress. The Arkalon Council continues to improve on the overall quality of the community’s park system.

At present, there are three lakes and a marsh area. All of the fishing areas have been stocked, mainly with catfish. Visitors to the area are also likely to find an unusual variety of birds. Arkalon provides a permanent home to a gaggle of approximately 40 Canada geese, along with many stopover geese – wild ones that come and go, along with many other water birds that stop along their annual migrations.

Several nature trails wind through the marsh area, providing visitors with an opportunity to sight beaver, deer, kingfishers, turtles, snakes, squirrels, and raccoon. Bird watchers frequently sight a spectrum of species, from bluebirds to falcons, and the foliage is equally diverse. Markers identify many of the unusual trees and shrubs, and benches offer hikers a spot to sit and take in the natural beauty of the scene.

Arkalon provides a place where a family can get away from town and take the kids out to a picnic or just feed the geese. There are electrical hookups in the campground area, a bath house, and RV dump station, and a shelter facility.rn 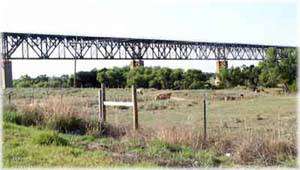 The Samson Bridge was erected in 1939, by the railroads to cross the Cimarron River. It was built three miles east of Arkalon as a potential railroad crossing. When the original railroad crossing at Arkalon was flooded, the Chicago, Kansas and Nebraska railway diverted the railroad track to the Samson Bridge. The Bridge helped speed the commerce of the Southwest to its destination. Called the Samson of the Cimarron, the Mighty Samson is 1,268 feet long and was considered an engineering marvel of the day.

Address: Located 13 miles northeast of Liberal, off of Highway 54.

In April, 1888, the first train with goods other than construction materials arrived at the end of the new Rock Island line in Liberal, Kansas.

The depot, a crumbling relic just three years ago, was rescued and refurbished with a combination of funding from the city and state, private contributions, and a lot of hard work. With the first building completed, efforts continue to finish the eastern building, which once housed a hotel and restaurant.

For now, several city offices, including that of the director of community development and chamber of commerce, have found homes in the western building.

The newly restored depot is listed on the National Register for Historic Landmarks and is the central theme of the annual Rock Island Jubilee in June.