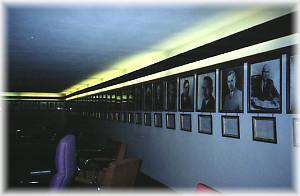 “What do Stephen A. Douglas, Horace Greeley, Horation Seymour, Henry Clay, Alf Landon, Richard Nixon and Jimmy Carter have in common? – They all ran for President … and lost.” Although these men and many others in American Presidential History were unsuccessful in their bids to attain the nation’s highest elective office, they were by no means losers.

Since 1965, Norton has been home to the “They Also Ran” gallery. Pictures of unsuccessful candidates for presidents from Thomas Jefferson to John McCain line the walls. There’s also a short biography for each inductee. Famous men like Andrew Jackson share the walls with John C. Fremont and William Jennings Bryan. New York Times publisher Horace Greeley, who once spent the night at stagecoach Station 15 near Norton, is among the distinguished losers and is the honoree credited for the gallery’s conception. Norton banker, W.W. Rouse, started collecting the portraits after reading the book, “They Also Ran” by Irving Stone in 1965.

The gallery is still located on the mezzanine of the First State Bank in Norton. It’s open during banking hours. The bank also has other interesting exhibits and collections.