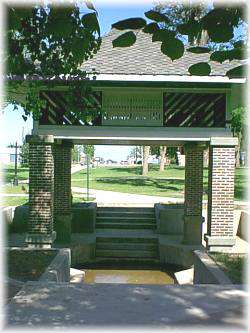 The spring house at Conway Springs is listed on the National Register of Historic Places and is immortalized within the city park where visitors can still see the bubbling water as it freely flows into the encased pool.

The story goes that in 1882, town founder, Hiram M. Cranmer, was afflicted with rheumatism and kidney and bladder inflammation. When he began breaking out the forty acres adjoining the springs, he brought water from home to drink – hard water, and when it got warm it became quite unpalatable. He waded out into the center of the pool for clean water – the edges had been used for watering his horses. He came upon cool bubbling water and it tasted good. He began taking this water home and using it exclusively. Within a week his health improved and continued to improve. Neighbors soon learned of it. One who had been drinking Eureka water (Eureka Springs, Missouri) was so happy to have it close by. Many claimed that they were helped by drinking this water.

Mr. Cranmer subsequently drained the pool and uncovered nine sparkling flowing springs. Two of these he filled up, and the two largest he cased with twenty-four inch circular tile and closed them with a spring house built of lattice, painted green. The five others were located at intervals for a distance of about two-hundred feet to the east of the spring house. These he encased in limestone – about six by six feet square and about that deep. Walks made of stone brought from Winfield connected the several springs. The grounds were landscaped with trees and shrubs. The springs flowed from ground level and formed a pond and stream to the north.

In 1909, Conway Springs was awakened to the realization that it had the best water in the United States, 99.99% pure. The site of the water springs was made into a park with a spring house covering two springs of the original nine. The rest were closed up as they were dangerous to pedestrians. Closing them also added to the flow of the remaining two.

The springs were later dug out and walled up with limestone and although at a depth of four or five feet, the water was so clear and pure that when one looked into a spring it appeared only a few inches in depth.

Ads that Hiram Cranmer placed in the Star advertised Conway Mineral Springs and emphasized the medicinal qualities of the water. People came from all parts of the country to drink and bathe in these waters as they were recommended to benefit those who were suffering. A large hotel, the Spring Avenue Hotel, was built near the springs to take care of those who came.

In 1999 the present spring house was completely refurbished and rebuilt, restored to the original 1909 spring house style. As they did a century ago, the springs flow again but the water is not safe for drinking.

A Conway Springs businessman, recently purchased a “reverse osmosis plus six additional steps” filtration system that purifies the spring water of Conway Springs. He uses it for his spotless car wash. Because of this filtration, the water is safe for drinking and very delicious. It it available for purchase at the car wash (located north of Sav-A-Trip) for only 25 cents a gallon.