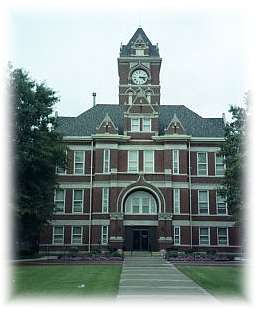 The historic Rice County Courthouse built of red brick and featuring a four directional clock tower was built in 1910. It is surrounded by a compliment of grass, trees, and flowers and is found in the center of the Lyons Town Square. The present building is the third courthouse to house the county seat records. The first building is remembered as an interesting matter in history concerning the 1876 County Seat dispute which ended in the “stealing of the courthouse”.

When it came time to move the courthouse a Mr. Pool and George Mowrey were employed, to take it apart carefully so the lumber could be used again. Atlanta was located on AT&SF property and J.H. Ricksecker of Sterling was the agent for the company as well as their attorney. Therefore, the building was on railroad property and according to law, buildings erected on another man’s property cannot be removed without the consent of the owner as it is considered a permanent improvement. Pool and Mowrey were dismantling the building one day when Ricksecker appeared in town and asked them what they were doing. After he learned of the nature of their task he informed them that they were under arrest. The men were taken before Earl Joslyn, Justice of the Peace, and a trial was set for the next day at 1 p.m.. Pool and Mowrey didn’t have anyone to pay their bond and Joslyn didn’t want to put them in jail. So they were released and told to at least show up one hour before the trial.

Word spread fast and that night men came from everywhere to Atlanta, and it was not long before the building was torn down and hauled to Lyons, all done before morning. Justice Joslyn conveniently thought his watch was an hour slow that morning and set it ahead an hour. Pool and Mowrey were there on time, as promised, one hour early. The case was called promptly on time by Joslyn’s watch. After waiting a few minutes for Ricksecker to appear, the case was dismissed and the defendants allowed to go home. An hour later, Ricksecker appeared, and being informed of what had happened, that he had not been there to look after it, he threatened to carry the case up, being in a furious rage. But Ricksecker did not pursue it further and the courthouse was then rebuilt on the south side of the Lyons Square. In 1910, the present day red-brick courthouse was built in the center of the square.