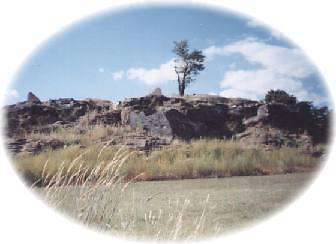 This silent sentinel of the plains was a stopping place for the hardy men and women who came from their eastern homes to find wealth and fortune in the boundless West. And the entire length of the Santa Fe Trail, noted for its historic points of interest, affords no spot that has woven around it more real history of the early days than this gigantic rock formation.

Before the advent of the white man, it marked a way for the Indians in their periodical migrations from what is now Southern Kansas to the valley of the Platte river in Nebraska. For years and years, Pawnee Rock was a point at which the Comanche, Kiowa, Arapahoe and Cheyenne Indians held their councils of war and peace. Within the shadow of Pawnee Rock many famous Indian battles were fought, battles that never found a place in United States history, but were described by noble warriors of the Plains who took part in them.

Countless bones and arrowheads have been dug out of the soil in the vicinity of the Rock and they bear witness to the bloody history that was made before civilization claimed it for the abode of the whiteman.

The exact origin of the name “Pawnee Rock,” is lost in antiquity. However, Gen. Phillips St. George Cooke, who knew the plains, said the name originated at a battle fought between the Pawnees and the Commanches. The year was 1832. Besieged by the Commanche hostilities, the Pawnees took refuge in almost impregnable crevices of the bluff only to find themselves entirely without water. As their thirst became unendurable, the Pawnees, rather than risk a flight to the river, slaughtered their ponies. For days they withheld the Commanches until, crazed by thirst, they decided to try and cut their way to water. Their attempt failed and they were slaughtered to a man.

The Commanches, touched by this display of intestinal fortitude, erected on the Rock’s summit a tall pyramid of stones in commemoration of their late enemies. For years, according to legend, the mound of stones remained surrounded by the bleaching skeletons of the brave Pawnees. Hence, the name “Pawnee Rock.”

As the lumbering conestogas began to push westward along the trail, the pioneers began to use the Rock as a giant “guest book,” carving their names in every conceivable nook and cranny of the bluff’s face.

As rails and spikes of the Santa Fe Railroad inched their way across the Great Plains of Kansas in 1872, the town of Pawnee Rock sprouted and grew. The town lies at the foot of the historic sandstone cliff from which the town derived its name. The town grew in population and soon became incorporated.

Today visitors can climb to the top of Pawnee Rock and gaze out over the Great Plains as travelers along the trail once did. Signage provides information about the land formation and how it once looked.