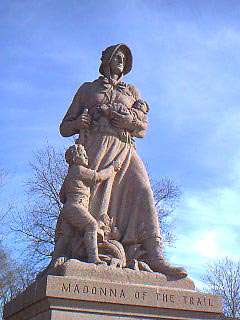 This striking statue, depicting a pioneer mother with two children, pays tribute to the sturdy women of covered wagon days. The 10-feet-tall figure is made of pink Algonite stone and was erected in 1928 by the Daughters of the American Revolution whose vision inspired sculptor August Leimbach from Kaltennordheim, Germany.

Identical Madonna statues were erected in historically significant communities in 11 other states that connect the east coast to the west along the trails established by the Old Trails Association. Judge Harry Truman was on the committee to assist in making the selection of the trails to follow. The trails pass through 12 states from West Virginia, through Ohio, Missouri, Illinois, Colorado, California, to name a few of the twelve. Council Grove received the statue as it was the place of the signing of the treaty with the Osage Indians to allow for the commerce between Independence Missouri and Santa Fe New Mexico. The National Society Daughters of the American Revolution and Old Trails Associations and the Kansas Historical Society also have numerous granite markers from Missouri to southwest Kansas along the Santa Fe Trail.

Address: Corner of Union and Main Streets
Phone: 800-732-9211
Our Email: visitors@councilgrove.com
Our Website:www.MadonnaoftheTrail.com