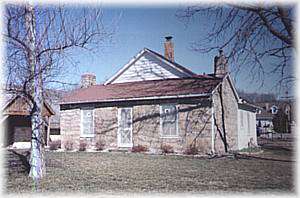 The Indian Pay Station, the oldest building in Pottawatomie County, was built in 1857 by the United States Government as an Indian Agency where all business between the Pottawatomie and the government took place. It was later used as the place the Pottawatomie came to receive payments for lands taken from them. The last payment was made from this location in 1870. This building was placed on the National Register of Historic Places in 1972 and is presently used as a museum.

The building was donated in 1967 by the St. Mary’s Jesuits upon their departure. The original building was a two-room stone structure. The northern wooden addition was thought to be added sometime in the 1920’s. rn