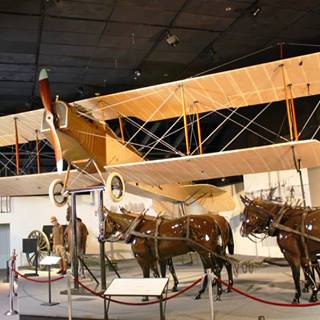 The Frontier Army Museum depicts the Frontier Army (1817-1917) and history of Fort Leavenworth (1827-present). The original collection began in 1939 when the wagon shop at Fort Leavenworth closed and the horse-drawn vehicles were relocated and called the “Old Rolling Wheels Museum”. In 1960, the Museum was officially recognized as an Army Museum and has continued to preserve one of the finest collections of nineteenth century military artifacts in the country.

The museum collection of over five thousand items consists of weapons, uniforms, equipment, and vehicles used by Frontier Army soldiers as well as many Fort Leavenworth related items. Two of the premier pieces are the 1832 General Officer Coat worn by General Henry Leavenworth and a Curtiss JN4D aircraft, of the type used by General Pershing during the “Punitive Expedition” into Mexico. It displays one of the largest collections of military carriages on exhibit; a carriage used by Abraham Lincoln in 1859; and the history of the Frontier Army in the West.

The Fort Leavenworth gallery highlights the importance of Fort Leavenworth’s role in the exploration and expansion of the nation throughout the nineteenth century as well as its continuing role in soldier education. The Museum’s main gallery highlights the efforts of the Frontier Army in exploration, expansion and protection of the Trans-Mississippi West from the Lewis and Clark Expedition (1804) to the chase of Pancho Villa by General John Pershing (1916). The museum offers a unique look at the tools of soldiering used throughout this time period.