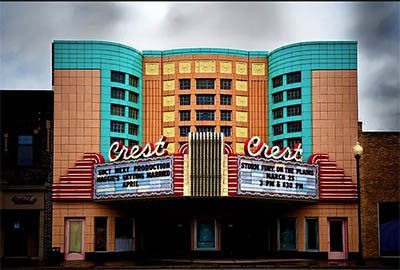 The Crest Theater, a former movie theater in downtown Great Bend, is listed on the National Register of Historic Places and has been renovated for use as a live performing arts facility.

In addition to four community theater productions a year, the 618 seat theater’s stage is host to a wide variety of other events, including musical concerts, touring theatre, dance, lectures and seminars.

Noted theater architect Robert Boller designed the building with geometric and Art Moderne influences. The interior boasts murals and interior decorations from artist Frank Oschwald. Other innovations included a heated sidewalk in front of the building to aid in the melting of snow during the winter months. The Crest Theater was nominated as part of the “Historic Theaters and Opera Houses of Kansas” multiple property nomination for its association with local entertainment history and for its architecture.