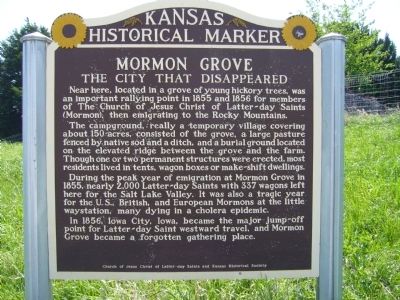 A historic marker erected by the Kansas State Historical Society commemorates the site where, during the years between 1855 and 1857, some 20,000 Mormons camped before moving on to their “promised land”.

Inscription.   Near here, located in a grove of young hickory trees, was an important rallying point in 1855 and 1856 for members of The Church of Jesus Christ of Latter-Day Saints (Mormon), then emigrating to the Rocky Mountains.

The campground, really a temporary village covering about 150 acres, consisted of the grove, a large pasture fenced by native sod and a ditch, and a burial ground located on the elevated ridge between the grove and the farm. Though one or two permanent structures were erected, most residents lived in tents, wagon boxes or make-shift dwellings.

During the peak year of emigration at Mormon Grove in 1855, nearly 2,000 Latter-Day Saints with 337 wagons left here for the Salt Lake Valley. It was also a tragic year for the U.S., British, and European Mormons at the little way station, many dying in a cholera epidemic.